First Rides of the Year

Yes, plural because I've been a slacker writing about the stars of this show: the horses! :)

On January 1st, Carlos and I rolled our not-hungovered selves (see partying at end of 2016 review post. :D We only had a couple of beers each and really did dance the night away!) out of bed at a reasonable hour so we could head out to the barn and ride. It was warm-ish in the upper 40's for once.

We did a short loop because at the moment there has been deer hunting going on across the train tracks, which means our usual 10-mile loop is shortened to 5 miles. (Though as of this writing, I just confirmed that the firearms hunting season ended with December.) 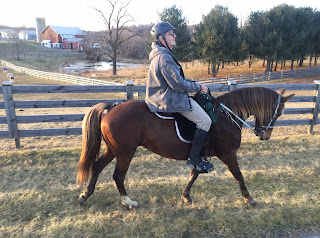 Anywho. It was a short, fast ride, just to play it safe. Carlos had not ridden with me on trail in forever...since a ride at Catoctin Mountain two weeks before Fort Valley in October! I'm still not sure how that much time went by without us getting a ride in together. His work schedule had been crazy and the weather had not cooperated when he was off, but I had not realized it had been that long until we talked about it.

Have some photos from our Catoctin ride, since I forgot to mention it in the 2016 review post as well! It was a beautiful fall day, though it was windy and bitterly cold (we went from over 60 degrees to 30 before the windchill in a 12-hour period!) 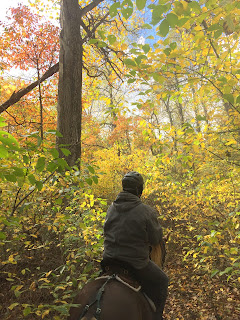 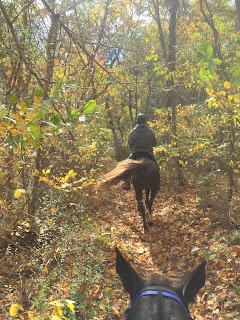 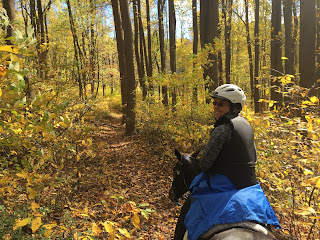 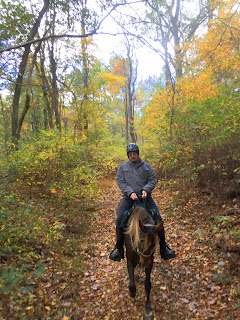 We had a blast on our first ride of 2017 though. And Carlos got fantastic footage, as always. 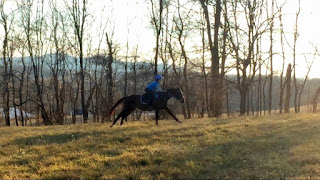 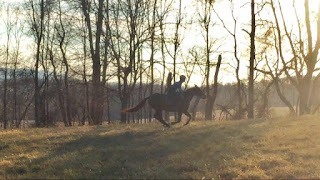 I wish I had gotten one of him when he was taking that video...Gracie was being a fussbucket and she wanted to join Lily in the uphill gallops, but Carlos quietly got her to calm down and just stand still with the reins draped over her neck while he used both hands to film with the phone. I don't know how he does it. Not the filming, but the calming down of the mare that can be a fire-breathing dragon when she wants to be. They looked beautiful against the faded green of the hay field, standing next to the one lone tree in the entire field, Gracie seeming to shine from within in the light of the late afternoon sun, and Carlos looking like he was born on the back of a horse.

We did some hill gallops together afterwards. He was grinning from ear to ear as we marched the girls back to the barn at the end of our ride. 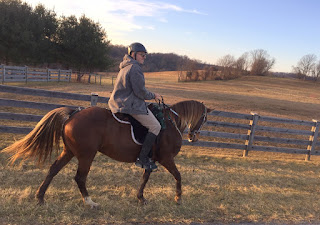 It snowed at the end of last week, a good 3" for our town, which was 2x more than had been predicted and I was itching to ride in it. We were going to haul out last Sunday but 20 mph winds with windchills in the low single digits put a damper on that one. :( Shanna was off work today so her and I took advantage of the remaining snow before it all melts away tomorrow.

The high for today was originally supposed to be 48. With sun in the afternoon. I had checked it this morning at 7:00 am.

But we rode anyway! 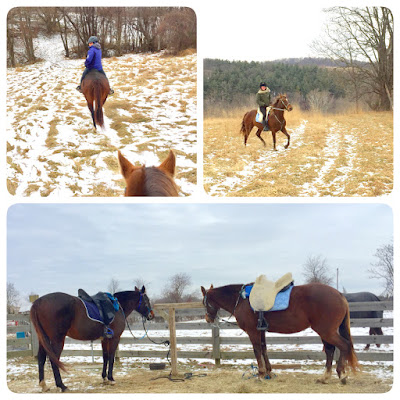 Our average pace wasn't spectacular (5 miles in an hour) but it was supposed to be a fun ride and fun is what we had. :D We walked and talked, and then trotted, cantered and galloped when we started to get cold. There is something special about flying over snow-covered ground as your horse's feet kick it up into sparkling white dust behind her. I don't think we ever stopped laughing.

Which is all that you can ask for. :) 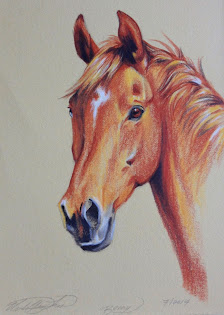 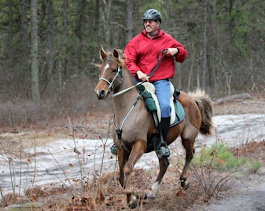 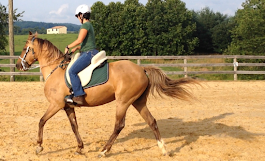